Studies show that smoking doubles the risk of cataracts and with heavy smoking, the risk triples. I 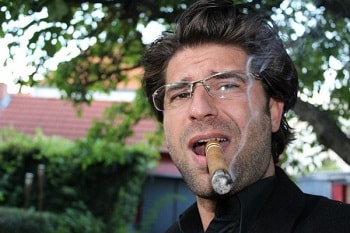 n fact, there seems to be a direct correlation between the amount of smoking and the likelihood of cataracts. Cataracts are characterised by the clouding of the lens of the eye and it is believed that smoking affects the cells of the lens, accelerating this process.

Cataracts are a leading cause of vision loss worldwide, however they can be treated surgically by removing the clouded lens and replacing it with an artificial one. Symptoms include:

According to medical research, smoking increases the likelihood of developing age-related macular degeneration between two and four times the normal risk – the more you smoke, the greater the risk. Unfortunately, there is also an increased risk for those exposed to cigarette smoke for extended periods of time.

Age-related macular degeneration or AMD is a condition in which the macula, which is the center of the retina, begins to to deteriorate, reducing central vision and the eye’s ability to see fine details. The disease is characterized by blurred and distorted eyesight and blind spots in the central vision. With time, the disease can progress to leave the person with low vision, which is significant vision loss that cannot be corrected by eyeglasses, contact lenses or refractive surgery.

What are the most at-risk groups?

One of the highest risk groups among smokers is diabetics. They are more likely to suffer from diabetic retinopathy, which occurs when the blood vessels of the eye are damaged. Smoking is also especially contraindicated for people who suffer from dry eye, since in addition to the lack of tears they suffer from, smoke increases dryness and eye irritation.

Smoking is also especially contraindicated during pregnancy, as it can lead to premature birth and increases the chances of the baby suffering from a visual disorder known as retinopathy of prematurity. This disorder occurs when the blood vessels in the newborn’s retina have not developed properly, which could lead to retinal detachment and, in some cases, even blindness. In addition, it has been found that if the mother smokes during pregnancy, the baby is up to 5 times more likely to get meningitis, along with eye problems and infections.

Smoke exposure also affects children. Exposure to tobacco smoke in both active and passive smokers is one of the best known threats to eye health. However, a new study in Hong Kong has shown that as early as age 6, children can develop eye problems caused by smoke. It causes a thinning of the choroid (a layer of the retina filled with blood vessels) which, as a consequence, puts their vision at risk.

Uveitis (inflammation of the eye's middle layer, or uvea) is a serious eye disease that can result in complete vision loss.

It harms vital structures of the eye, including the iris and retina, and can lead to complications such as cataract, glaucoma and retinal detachment.

Expandable
Evidence shows smokers are more likely than non-smokers to have uveitis, and smoking appears linked to the development of uveitis. One study found smoking was associated with a 2.2 times greater than normal risk of having the condition.

Diabetic retinopathy damages the blood vessels of the retina and can result in vision loss.

More than 5 million Americans age 40 and older have diabetic retinopathy due to type 1 or type 2 diabetes. And that number will grow to about 16 million by 2050, according to the U.S. Centers for Disease Control and Prevention.

Smoking may as much as double the risk of developing diabetes.

There also is a causal relationship between smoking and both the development and progression of diabetic retinopathy, in addition to numerous other diabetes complications.

Smokers are up to four times more likely to go blind in old age.

Dry eye syndrome describes insufficient tears on the eye's surface, which are needed to keep the eye lubricated and healthy. Sufferers of dry eye can experience eye redness, itchiness, a "foreign body" sensation and even watery eyes.

Tobacco smoke is a known eye irritant and worsens dry eye — even among second-hand smokers — particularly for contact lens wearers. People who smoke are nearly twice as likely to have dry eyes.

The good news is that after quitting smoking the risk of suffering from some eye disorders is considerably reduced.

In addition to quitting smoking or ventilating spaces where tobacco smoke has been present, there are some tips we can follow to protect our eyes:

If smokers notice any changes in their vision, they should see an eye doctor immediately.