Babies learn to see over a period of time, much like they learn to walk and talk. They are not born with all the visual abilities they need in life. The ability to focus their eyes, move them accurately, and use them together as a team must be learned. Also, they need to learn how to use the visual information the eyes send to their brain in order to understand the world around them and interact with it appropriately. 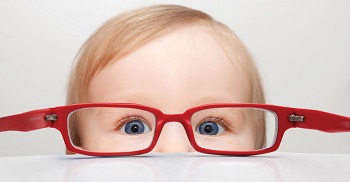 From birth, babies begin exploring the wonders in the world with their eyes. Even before they learn to reach and grab with their hands or crawl and sit-up, their eyes are providing information and stimulation important for their development.

Healthy eyes and good vision play a critical role in how infants and children learn to see. Eye and vision problems in infants can cause developmental delays. It is important to detect any problems early to ensure babies have the opportunity to develop the visual abilities they need to grow and learn.

Parents play an important role in helping to assure their child's eyes and vision can develop properly. Steps that any parent should take include:

At birth, babies can't see as well as older children or adults. Their eyes and visual system aren't fully developed. But significant improvement occurs during the first few months of life.

The following are some milestones to watch for in vision and child development. It is important to remember that not every child is the same and some may reach certain milestones at different ages.

One to two years old

Signs of Eye and Vision Problems

While many infant vision problems are only detectable by a pediatrician or an ophthalmologist, you can take a few steps to ensure early intervention on any potential issues:

If you notice any of the above or any other visual issues that don’t seem quite right, don’t hesitate to bring baby to the doctor for an exam.

Even if no eye or vision problems are apparent, at about age 6 months, you should take your baby to your doctor of optometry for his or her first thorough eye examination.

Things that the optometrist will test for include:

These problems are not common, but it is important to identify children who have them at this young age. Vision development and eye health problems are easier to correct if treatment begins early.